I don’t expect any of us need persuading that listening to what we call News can be bad medicine. There’s nothing like a 3 minute newscast to send us into a downward spiral on even the most joyous of days. And yet I don’t know about you, but I periodically voluntarily tune in to the morning or evening news out of a desire to know “what’s going on” -- so to speak-- even though I know that what I hear is only a tiny slice of all that’s afoot; and a pretty skewed one at that. Yet it still carries it’s eroding impact.

So why would I bring into our gathering this morning even a whiff of yesterday morning’s news -- the outcome of the trial in North Battleford, the scene of massive numbers of desperate people fleeing Venezuela, and the escalating war-like talk that’s framing the resistance to the pipeline development?   Except that it was when I finally, late in the day yesterday, after much time lingering with this story from Mark’s Gospel, it was when I finally allowed the news sitting on my heart like a stone to come alongside this mountaintop story, that I felt the fire begin to kindle … a sign for me of the Spirit alighting.

How so?
Here’s what I’m seeing.
The story begins very specifically: “6 days later, Jesus took with him Peter, James and John and led them up a high mountain where they could be alone by themselves.” 6 days later … in other words, it’s not an event out of nowhere … it comes in the context of something earlier. It comes within days of Jesus having said some things … hard things. He talked about his impending suffering, his rejection, his death and his rising. Of course it made no sense … how could someone so connected to God, God’s beloved, suffer? Surely the great reliever of suffering would be spared suffering.

So here they are, his dear friends, unable to take in what’s coming. Unbeknown to them, and very soon they will see him brutalized … humiliated, defenceless, tortured to death. On this day, up the mountain they go with Jesus, like he goes repeatedly, to a quiet place to pray, and something astonishingly beautiful happens. Suddenly, right before their eyes, Jesus appears filled with dazzling light. And Moses and Elijah, these two long gone people who figured so significantly in their history, they appear with Jesus, the three of them talking together.
What is this they are being given to see?

I’m thinking we’d call this a glimpse of unspeakable glory … spine shivering glory! Peter, James and John are awestruck, terrified, all in one, so powerful is the experience. The visuals are electric!
Moses and Elijah long gone, right there, talking with him … and Jesus himself wondrously radiant, shining like the sun.

Now and again I’ve heard Mary Luti use this phrase, “a someday resurrection” … that’s what I wonder if they and we are being given to see here.  A someday resurrection … a glimpse of what’s coming … a glimpse beforehand of what is finally to come, regardless, in spite of whatever happens in the meantime.  Peter, James and John, they have no idea of the unthinkable horror on the horizon … but here they are given, ahead of time, an unforgettable glimpse of something more … to hold it close. We even hear Jesus warning them not to speak of this to anyone -- not until after “the rising from the dead” … which at that point are only words that puzzle them to no end.

Because that phrase came back to me, I went searching for the piece in which I had first encountered it. It was a daily devotional I received on-line where Mary Luti was offering a word on an anniversary of the fatal attacks on September 11th. She begins with this verse from the Gospel of Luke where we hear Jesus say: "Love your enemies, do good to those who hate you, bless those who curse you..." - Luke 6:27-28

From there Mary goes on to write this …

“We were staggered by the icy calculation of the attacks, stupefied that the men who carried them out believed God was pleased with the carnage. It was harder than ever to hear the Gospel in those days: Love your enemies. Repay no one evil for evil. How could we hear it, much less obey, after bad men with box-cutters ripped open our hearts? It felt almost obscene to suggest it.

Yet as families grieved, and the nation sped to war, and it became a civic virtue to hate your Muslim neighbor, there were some who asked, If this is not the time to summon each other to love, when is? What else should we say in a world where now not even an eye for an eye is sufficient?

And so in those awful days, obedient in faith, they spoke of the forgiveness of enemies, speak of it still, and hope to keep speaking of it to the end of their days, even though they know it is in some respects an offensive and terrible doctrine.

But faith is faith, not common sense, not even pious common sense. In the bleak landscape between ordinary devotion and extraordinary desperation, faith demands a kind of surrender and bestows a mysterious courage. By its peculiar grace alone, we grope and anguish, remember and pray, hope and wonder, obey and persist our way towards healing, a new humanity, an impossible love, a someday resurrection.” [1]

We know it, don’t we, how easy it is for the grief and the anger and the horror that we feel in the face of the suffering in our world, the injustice, and violence, to plunge us into despair, into yet more violence and inhumanity. Meanwhile there is another way … the way of Jesus’ teaching, the way we see embodied in his living -- the way of compassion, of mercy, the way of forgiveness, of solidarity -- a way that moves us in an altogether different direction … towards healing, towards a new humanity, towards an impossible love, towards a someday resurrection.

This vision that is given to Peter, James and John, it’s a revelation! … a revelation that God is already powerfully at work to raise up out of the horror, out of the ash, new and radiant life.

There it is … maybe you can feel it too … the fire beginning to kindle in your being as we begin to see the morning’s news in the light of this vision of Jesus, shining like a the sun, shimmering with God’s power for life. There, even before the horror has begun to unfold, is this revelation of God already powerfully at work, to redeem, to renew.

And what would happen if we allowed ourselves to envision Gerald Stanley also … also held, upheld in the powerful light of God’s love.

I don’t mean for a moment to suggest that a vision like this lets us off the hook, frees us from the call to live in Jesus’ radically alternative way.

What I do mean to suggest is what if we allowed ourselves to be swept up in “the immense and saving beauty that burns in Jesus … the bright beauty destined for us all.” [2]

“Faith is faith, not common sense, not even pious common sense. In the bleak landscape between ordinary devotion and extraordinary desperation, faith demands a kind of surrender and bestows a mysterious courage. By its peculiar grace alone, we grope and anguish, remember and pray, hope and wonder, obey and persist our way towards healing, a new humanity, an impossible love, a someday resurrection.”

[2] Mary Luti, “Epiphany: Hide and Seek With the Divine, posted on December 28, 2017, https://sicutlocutusest.com/category/epiphany/ 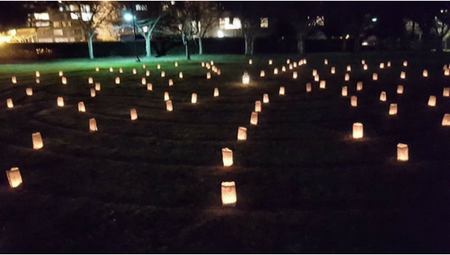