#1
“The lovely old carols played and replayed till their effect is like a dentist's drill or a jackhammer, the bathetic banalities of the pulpit and the chilling commercialism of almost everything else, people spending money they can't afford on presents you neither need nor want, "Rudolph, the Red-Nosed Reindeer," the plastic tree, the cornball creche, the Hallmark Virgin.
Yet for all our efforts, we've never quite managed to ruin it. That in itself is part of the miracle, a part you can see. Most of the miracle you can't see, or don't.

The young clergyman and his wife do all the things you do on Christmas Eve. They string the lights and hang the ornaments.
They supervise the hanging of the stockings. They tuck in the children. They lug the presents down out of hiding and pile them under the tree.

Just as they're about to fall exhausted into bed, the husband remembers his neighbor's sheep. The man asked him to feed them for him while he was away, and in the press of other matters that night he forgot all about them. So down the hill he goes through knee-deep snow. He gets two bales of hay from the barn and carries them out to the shed. There's a forty-watt bulb hanging by its cord from the low roof, and he turns it on. The sheep huddle in a corner watching as he snaps the baling twine, shakes the squares of hay apart, and starts scattering it. Then they come bumbling and shoving to get at it with their foolish, mild faces, the puffs of their breath showing in the air.

He is reaching to turn off the bulb and leave when suddenly he realizes where he is. The winter darkness. The glimmer of light.
The smell of the hay and the sound of the animals eating. Where he is, of course, is the manger. He only just saw it. He whose business it is above everything else to have an eye for such things is all but blind in that eye. He who on his best days believes that everything that is most precious anywhere comes from that manger might easily have gone home to bed never knowing that he had himself just been in the manger.

The world is the manger. It is only by grace that he happens to see this other part of the miracle.

Christmas itself is by grace. It could never have survived our own blindness and ravages otherwise. It could never have happened otherwise. Perhaps it is the very wildness and strangeness of the grace that has led us to try to tame it. We have tried to make it habitable. We have roofed it in and furnished it. We have reduced it to an occasion we feel at home with, at best a touching and beautiful occasion, at worst a trite and cloying one. But if the Christmas event in itself is indeed as a matter of cold, hard fact, all it's cracked up to be, then even at best our efforts are misleading.

The Word become flesh. Ultimate Mystery born with a skull you could crush one-handed. Incarnation. It is not tame. It is not touching. It is not beautiful. It is uninhabitable terror. It is unthinkable darkness riven with unbearable light. Agonized labouring led to it, vast upheavals of intergalactic space/time split apart, a wrenching and tearing of the very sinews of reality itself. You can only cover your eyes and shudder before it, before this: "God of God, Light of Light, very God of very God . . . who for us and for our salvation," as the Nicene Creed puts it, "came down from heaven."

Came down.
Only then do we dare uncover our eyes and see what we can see.
It is the Resurrection and the Life she holds in her arms. It is the bitterness of death he takes at her breast.” 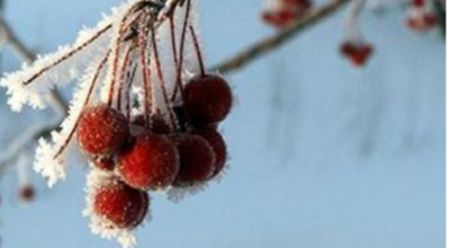