On Wednesday, when Daniel and I met to plan for the shape of today’s service, Daniel read aloud this passage from Luke’s Gospel, then closed the bible … and we both looked at each other and all we could say is “this is crazy! this is crazy- wild!” All we could do was laugh. What else is there to say to such a story? What is this?!

Sure, the huge haul of fish is part of the wildness. But no less wild is the response of Simon and the others. Like so many stories in scripture, this one defies the normal course of events, how the world really works --or so we think! Hardly knowing what to make of them or what do with them, we’re just as likely to slide them into that out-of-the-way box that’s labelled “more reasons why the bible is no help to the cause.”

But what if we give them some room, these miracle stories … some room to breathe, some light of day. They have a way of rattling our cage, these stories … and if we allow it, they can cause us to wonder, to question, to feel out of our depth perhaps … which is to say not so in control, not so certain. Maybe they come to us as rumours of glory … maybe they serve to crack us open to what‘s really real.

Miracle stories … they’re not just scattered through scripture. I know that among us right here, miracles abound. From one microscopic egg and sperm comes every new little baby we’ve ever held, ever been. We are miracles!
Some of us have come this close, and then some, to our death, and know what it is to be delivered! Raised up! Called into life. It’s a miracle!
Some of us have carried within us untold hurt for decades -- the majority of our years!-- and after all this time, are experiencing a depth of understanding, even compassion … after all these years, healing! It’s a miracle!

I’ll bet there are dozens of stories among us. I expect the truth is, we’re swimming in a sea of miracles! More than we know or notice. And if we have a problem with miracles, I expect it’s the seeming inconsistency of these things -- not that there is such a thing, but why here and not there? … how is it that this woman is a cancer survivor and this one not? Why was there not even one fish night before and now, more than they can manage?
Is it just a matter of being in the right place at the right time, or the wrong place at the wrong time? I expect there’s some truth in that… but that still doesn’t account for it all.
And maybe that isn’t the point anyway … to explain it … or to get to the place where we’re at ease with it.
Maybe instead of a point, it’s an invitation -- to listen … to trust even when it doesn’t make a whole lot of sense, to follow his lead … to go into the deep, to walk in his way, to come and see. Maybe the invitation is to listen and to trust his lead without having to know ahead of time that it will be worth it -- whatever that means … because our understanding of “worth it” just might get turned inside out and upside down on the way, anyway!

Do you notice? That huge catch didn’t exactly lead Simon and company laughing all the way to the bank! We don’t hear Simon or any of the other fishermen urging Jesus to stick with them as their new-found fishing partner. No. As the story goes, they pull up their boats onto the shore and leave it all behind … the boats, and the fish … presumably to the delight of the crowd that was pressing in.

Turns out, following Jesus’ lead to put their nets out one more time led them off in another direction altogether -- into an abundance of another sort. There was something about him that they would give everything to go with him.
Imagine letting our lives be re-arranged for a different kind of abundance through his companionship.

Listen to this piece by Jan Richardson.
She calls it “Blessing the Nets”. [1]

You could cast it
in your sleep,
its familiar arc
embedded in your
muscle memory
after months
years
a lifetime
of gathering in
what you thought
would sustain you
forever.

You would not
have imagined
it would be so easy
to cast aside,
would never have believed
the immediacy
with which your hands
could release their
familiar grip,
could let it go,
could let it simply continue
its arcing path
away from you.

But when the call came
you did not hesitate,
did not pause,
did not delay
to follow,
as if your body
had suddenly remembered
the final curve
of the arc,
as if the release
begun in your hands
now passed through you
entirely
and you let go
of everything
to cast yourself
with abandon
upon the waiting
world.

To cast yourself with abandon on the waiting world …have you heard that call?
To cast yourself with abandon on the waiting world … I wonder if that isn’t a way through for those of us for whom the notion of "catching people" shuts us down in an instant because it smacks of trapping or reeling people in to trick them …and having felt it or seen it, we don’t want to have anything to do with it.
But when Jesus says “come and see! follow me!” what do we see him doing? Do you notice? His way with people has got nothing to do with trapping or tricking or manipulating.
The people who are drawn to him …it’s because there’s something about his words that fires their imagination, that ring so deeply true, that are so breathtakingly hopeful.
There’s something about how he is with people that restores their dignity, that recovers or uncovers their God-given infinite goodness. There’s something about his way with people that sees into their heart, exposes the longing they didn’t even know they had or were permitted to have.
There’s something about his way with people that heals, that feeds, that forgives, that calls forth life!

Do you see it? … There’s something about his way that’s all about opening us up to more -- abundantly more! It’s about helping us discover ourselves caught up in something big and wondrous! That’s what he’s about … connecting us with something wondrous such that we find ourselves letting go and re-arranging our lives for a different kind of abundance … an abundance of love … that lifts up and restores life … that heals and feeds and reconciles … that sends us laughing (not only laughing but finally laughing) all the way -not to the bank - but home - our true home in God … in whom there is limitless love, and constant encouragement to “go ahead … push out into the deep, come with me and cast yourself with abandon upon the waiting world!” 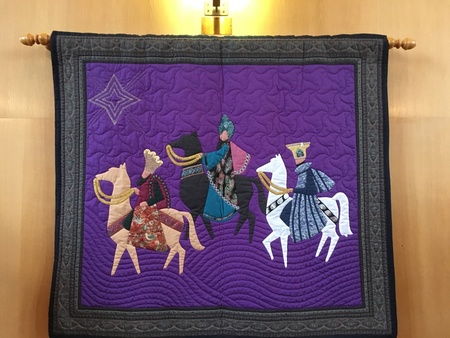