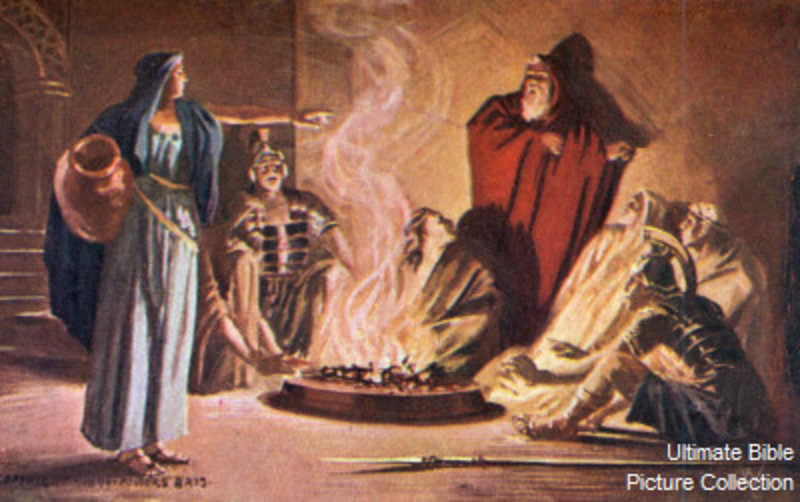 It’s been a strange night. I’m not talking about being up half the night out here in the cold. Being a servant girl to the High Priest I’ve had to do that more’n once. No, it’s what happened that’s mighty strange.

There I was warming myself around the fire with my mates when a great hullabaloo breaks out. Into the courtyard comes this troop of the High Priest’s guards — boots a’poundin’ on the flagstones, shields and swords a’clangin’. And in the middle ... this poor peasant fella. Now here’s one of the strange bits: instead of lookin’ terrified, he looks almost calm-like ... like HE’s the one in control and all those guards are just play-acting at being in charge! Hmmm ...

Anyway, as they pass me I think, “Hey, I recognise that fella. He’s the one they call Jesus of Nazareth” (not that “of Nazareth” is any compliment). I’d heard a lot about him - you’d have to be pretty much deaf not to have! People say he’s always saying the most amazing things, and healing the sick and the lame and the blind. Some folks have even up and left their jobs to follow him around; can’t imagine hearing or seeing anything that would give me the guts to do something so foolhardy! Some even say he’s raised people from the dead!!! Well you know you can’t believe everything you hear these days. Still ... I’ve always wondered what it’d be like to get close to him ... to have a chance to see for my own self.

And then next thing you know round the corner comes this big burly man. And I hear him asking one of the guards if he can warm himself by their fire. Well, as soon as he opens his mouth I recognize that accent — from up north, Galilee-way. Just like this Jesus of Nazareth. And all a sudden the shekel drops: he’s one of the blokes that’s always hanging around Jesus — close as a brother. So I think, “This is my lucky night! I can ask him if all of these wild stories are true”.

So I go right up to him and say all eager-like, “You also were with that Nazarene, Jesus.”  And before any of my questions have a chance to tumble out, he gets this panicky look in his eyes and blurts out, “I don’t know what you’re talking about!!” ... and turns his back on me and scuttles away.

Hmm, I think ... Maybe I’ve got the wrong fellow. So I go back to my mates and say, “Doesn’t that look like one of those fellas who’s always hanging around with this Jesus?” Sure enough, they agree with me, and go right up and ask him themselves. But all they get is the same panicky look as he blurts out again, “I don’t know what you’re talking about!!”. Well, before you know it, someone else asks him the same thing, and if he doesn’t start swearing a blue streak at them and pretty much shouting, “I don’t know this man you’re talking about!!”

Then all of a sudden, he goes real quiet — it’s like he hears something that really spooks him ... and this great big burly man starts weeping as if his heart would break. Like I said, a strange night!!

But now I hear my mistress calling for me. All this kerfuffle must’ve wakened her. She’ll be needing a flagon of spiced wine to settle her back to sleep. ... Still, I sure wish I had got some answers. ... But you know, there’s always tomorrow! Tomorrow when this Jesus is back on the street I’m going to make sure to get close to him ... close enough to see if he’d spare a thought for this simple servant girl. ... Yeah, there’s always tomorrow ...

Clearing the way for something new

Even on the day beyond all hope