Some people are just plain impossible to ignore.
Like John the Baptist, who comes onto the scene every Advent … this wild desert-dwelling, locust and honey eating, camel’s hair- clothing-wearing man, with eyes blazing, arms waving, his voice loud and uncensored. And while he’s truly “out-there” in every respect, he’s actually not about drawing attention to himself.
His sole interest is waking people up to who they are, to their complicity in the way things are, and to the possibility of another way altogether. It’s all there in that one word he’s crying out: “repent!”
“Repent,” he shouts, “for the Kingdom of heaven is close at hand.”

That word repent, it often smacks of, more than anything else, regret, guilt, shame, but in fact it comes from the Greek word metanoia meaning “change of mind” … as in turn around, face a new direction.  Open your mind and see a new world unfolding. Change your loyalty, re-orient your compass. Redirect your will, your attention. Align yourself with a New Way.

That’s what John is on about, out in there wilderness, away from the centers of power. He’s this messenger sent by God, called to proclaim that there is this one who is coming, bringing another way … a reign of righteousness, of peace with justice. “So get ready … Make way for God’s re-ordering of the world! It’s on its way!” he announces.

It’s this call to turn that landed for the worship team as we gathered a few weeks ago to wonder about our approach to Advent this year. What if we allowed John the Baptist to come off the page and meet us, confront us, encourage us with this call to Turn … to turn away from the things in which we've sought life, that can't actually give life, turning instead toward God, the Source of Abundant Life.

We hear John speak other words too … not just Repent, not just Turn. As he goes on the flesh out what that entails, we hear of “the axe at the root of the tree” cutting down that which doesn’t bear fruit.
He speaks of winnowing, of separating the wheat from the chaff. He speaks of unquenchable fire. He’s not talking about the fires of hell … he’s talking about the process of refining. He’s speaking of pruning, of sorting what needs to go in order for new growth, new life to spring forth.

I appreciate the glimpse we’re given of what John is up to through this piece by Steve Garnaas Holmes. Listen to this:

“Don't be afraid. John isn't threatening you.
He's setting you free,
relieving you of the crap that messes you up.

What are the rough places in you
that need to be made smooth,
the crooked places that need straightening out?
Surrender them to God.

What are the lies that clutter up your head,
the fears that infect your heart?
Let them be winnowed out and burned.

And what are the gifts you don't share,
the second coat you don't give away,
the despair you try to sell, overpriced?
Let God gently take them from your hands.
Christ comes with the music of love in his heart.
Let go of that suit of armour, attached as you are to it.
You can be free now. Throw it off, and dance. [1]

So there’s the personal dimension to this work, this business of repentance, of turning.  And then there’s the public, the social dimension of John’s call to turn that he gives voice to. “Repent!” he cries out, “for the Kingdom of heaven has come near.” The Kingdom of Heaven … it’s code for a whole new social arrangement. In other words, Rome’s empire is coming to an end, and God’s vision for a just and peaceful order is on its way.

This is John out in the wilderness making a way with his words.
This can be the gift of words: words can make a way.

We often default to the phrase “actions speak louder than words” … And of course, there’s truth in that. AND sometimes words are powerful agents for change.
Martin Luther King’s “I have a dream” speech
Greta Thunberg’s “our house is on fire!”
Barak Obama’s “Yes we can!”
Jesus’ “unbind him and let him go!”

Words can make a way. Your words. My words. Our words …
when they arise from the spirit of Jesus within us.
Jesus …God’s word of love.

Who would have thought Peace could arrive through the raising of a voice … that’s impossible to ignore! 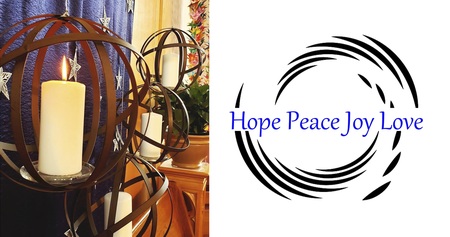 there are many who do not feel this joy

Words Can Pave a Way for a New Tomorrow

Hope riding on the tales of endings?