NEWS ALERT Earthrise: Riders on the Earth Together

Just when we might have thought Easter was last Sunday,  and that was that, the calendar of the Christian year tells us we have  fifty days to celebrate, fifty days to sink into the wonder and the mystery of Easter …and today we are only at day eight.

Notice the Easter season is longer than the forty days of Lent. Curious isn’t it that we need more time to find our way into life than what it takes for us to enter the desert, and experience the letting go and the dying, that’s part of the Lenten journey.  Curious that it takes longer to move into life than death.  Or is it so curious?

A few years ago I was introduced to a poem titled Spring by Edna St Vincent Millay.  Here’s what she writes:

To what purpose, April, do you return again?

Beauty is not enough.

You can no longer quiet me with the redness

I know what I know.

The sun is hot on my neck as I observe

the spikes of the crocus.

The smell of the earth is good.

It is apparent that there is no death.

But what does that signify?

Not only under ground are the brains of men

Life in itself is nothing,

a flight of uncarpeted stairs.

It is not enough that yearly, down this hill,

For all that our spirits may be lifted by the greening, the flowering of Spring, for all the promise of this season which suggests there is no death …still we know what we know.  The flowers of spring aren’t finally enough, are they, against the backdrop of the threat of Covid-19, and the looming catastrophe of global warming, and the heartache, the fear, the illness, the loneliness many of us are experiencing this spring. We know what we know.  Death works its way underground, in hidden and not so hidden ways.  We know it. We feel it. We hear it every time we turn on the radio or TV or go online. Death enters us before we ourselves ever get to our end.  “I know what I know” … and in the face of what we know,  even the  spectacular flowers of Spring aren’t finally enough, are they?

When I was first introduced to this poem, the person who read it to me,  went on to speak of faith … and his own convictions … of what holds him -- what he has to hold to, and what Jesus has got to do with it.  He was offering the poem as a way to say if our faith can’t stand up to, if it can’t be subjected to what we know, if it needs us to close a blind eye to the reality of suffering, then it’s of no use at all.

I found myself returning to this poem this past week – thinking about the mystery, the wonder we celebrate at Easter, and then my heart turning to the grief and fear and unknown  so many around the world face even in this week after Easter.  And then, the lectionary, the readings set for the 2nd Sunday of Easter, brings Thomas into our company … Thomas who for some reason wasn’t there that evening when Jesus appeared in the room where his friends were hiding out.  Who’s to know where Thomas was … but Thomas wasn’t there when Jesus came … so he missed him.  He missed this utterly surprising encounter.

When he did join the others, they were breathless … “we have seen the Lord!”  You can imagine them telling him -- all of them speaking at once -- how Jesus showed up in their midst … how he showed himself to them, spoke to them … how they saw him with their own eyes, heard with their own ears.  And Thomas missed it.  He missed it. It’s as though their words of life are to him like Spring in that poem,  coming “like an idiot, babbling and strewing flowers” … breathtaking to behold … but not enough, when he knows what he knows -- that brutality and death are real and rampant.

“Unless I see the mark of the nails -- put my finger into the place where the nails were, and my hand into his side, I will not believe,” Thomas insists.  For him, that’s the test … only if I can see and touch the wounds …for him there’s something about the wounds. Outrageous news of life, in and of itself, isn’t enough.

There something about the wounds of crucifixion … as though news of life that doesn’t somehow connect with or attend to the dread and the suffering that Thomas knows is for real, news of life alone, isn’t going to do it for Thomas.  It’s as though Thomas is saying, “If the tortured, humiliated one, the one who descended into hell, who stared it in the face and felt it in his own being, if that one appears, then - then I’m in.”

One week later, the story goes, the disciples were once again in the house. This time, Thomas was with them.  Although the doors were locked, Jesus came and stood among them.  Like he did for the others, he shows Thomas the wounds … even more he says “here, touch!”  So we’re given to see Thomas reaching out his hand,   touching into the wounds. “My Lord and My God!” he says … like something happened, something far more than he’s prepared for.

A few lines from Leonard Cohen come to mind, where he writes “I greet you from the other side of sorrow and despair, with a love so vast and shattered, it will reach you everywhere."

May the Spirit of the Risen One be at work, within and among us these fifty days of Easter. 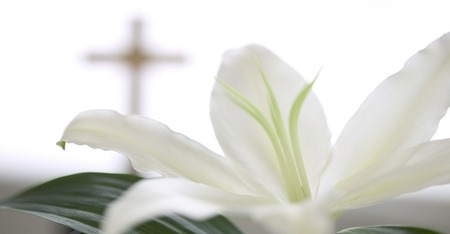 a way - even when everything else is falling apart

I am the gate