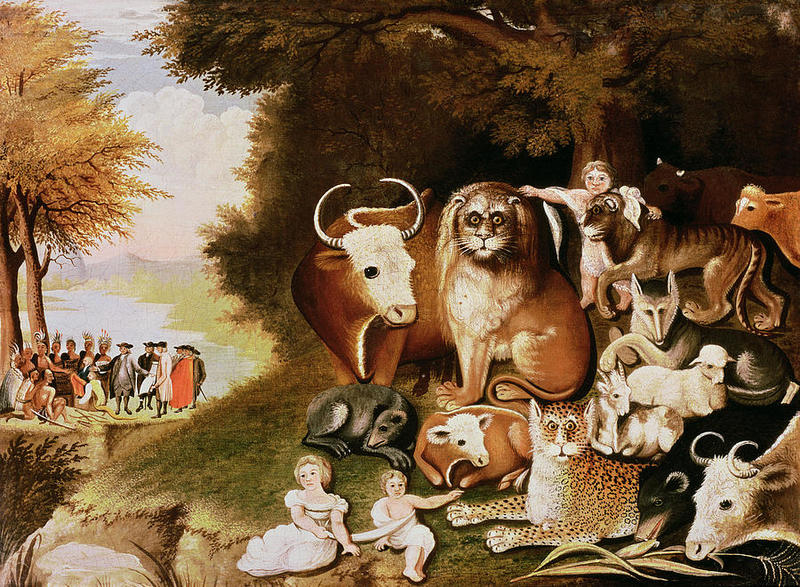 It was Tuesday after returning from our retreat that I began looking ahead to this Second Sunday of Advent -- the Sunday we light the Peace Candle-- inspired by Isaiah’s vision of the peaceable kingdom.  And then came Wednesday and President Trump’s alarming announcement about Jerusalem, quickly followed by the call among Palestinians for 3 days of rage.
“So much for Isaiah’s vision”… that was my first thought, as if this was the first time there was a clash between this vision and the facts on the ground. And yet, what are we to do with texts like this one when the reality of our world is so far from it? It’s tempting to write it off as naïve or bury it for its embarrassment.
But then I remembered a blessing a friend sent in a note I received last year …. “may your dreams be not of sugar plum fairies, but of visions that tell the story of God’s intentions for us and all the world.”

Visions that tell the story of God’s intentions for us and for all the world …
“The wolf shall live with the lamb. The calf and the lion together. The cow and the bear shall graze and their young lie down together; and the lion shall eat straw like the ox. The nursing child will play among the snakes. They will not hurt or destroy on all my holy mountain for the earth will be full of the knowledge of the Lord.”
Who knows if this vision came to the prophet Isaiah in a dream one night in a fitful sleep … or just how it arose in him … this vision of a world at ease, where there is harmony, safety, trust, prosperity … a world filled with a deep sense of well-being.  Who knows where he went with it, with whom he first spoke of it. What we do know is that this vision comes to us because he was bold enough to tell of it.
Without a vision, the people perish.

Walter Brueggemann, that great Old Testament scholar who is prepared to meet and work and wrestle with whatever arises in scripture, he takes a look at this vision from Isaiah and what does he say? “Unheard of and unimaginable! All these images of unity sound to me so abnormal that they are not worth reflecting on.
But then I look again, he says, and notice something else. The poet means to say that in the new age, these are the normal things. And the effect of the poem is to expose the real abnormalities of life, which we have taken for granted. We have lived with things abnormal so long that we have gotten used to them and we think they are normal.” [1]  Violence within families and communities, between races, among nations; the exploitation of people-- of children--of the land … it’s just how it is.

“We live in a world unaware of how abnormal and unnatural it all is. But this vision is about another kind of reality in which natural enemies become playmates and friends and brothers and sisters.  It is the announcement that God wills the world another way, and that it will be that way … for the world is not intended for alienation, for destruction, but for unity!” [2]

And what do we see at the heart of this other way? It’s this vision of predators no more … no more devouring … no more ripping apart and leaving bodies in pieces … no more choking the life out of another who is weaker. What we’re given to see in this other way is the forging of the most unlikely bonds and the enabling of life-giving companionship. What we’re given to see is the disappearance of aggression and the rise of risk-taking and vulnerability ... a whole new world of well-being borne of unforeseen relationships.

What if it’s not as far off we imagine, but closer than we thought possible? What if its arrival isn’t something we await apart from us but comes through us, with us?

This morning, onto the stage comes John the Baptist … out there in the wilderness, away from the places of power …clothed in animal skins, with a diet of locusts and honey. We’re given this picture of a man living pretty much off the grid … a man free enough, disentangled enough to not only receive the Spirit’s call .. but to be a voice for the Spirit in all its wildness. Unafraid to call a spade a spade, we hear from him this urgent call for things to be different. It’s time to wake up! Repent! he shouts. Repent meaning give your head a shake! Turn about … change your mind -- change your course.

This is a man who is filled with a vision of a different way … “the kingdom of heaven is near,” he says. It’s not a threat-- it’s a call to risk God’s dream, God’s intention for life … like it’s closer than we thought possible. We might expect his voice to be lost in the wilderness, except that people flock to him … that’s what we read: the people from the whole Judean countryside and all the people of Jerusalem -- peasant farmers and city-dwellers -- they were all going out to him. Something in his message compelled them … resonated deeply in them. And so what did John do in response to their response to deep calling unto deep? One by one he invites them into the river where he immerses them and raises them up. It’s a cleansing, it’s a dying and a rising … a leaving behind of the old and embracing the new. A birthing of sorts, marking a new beginning.

So where did they go from there? It’s not part of the story we’re given. Were Mary and Martha and Lazarus among them? Peter, James, John? We don’t’ know. Perhaps the question that really matters today is “where is the call of the Spirit taking us? How does this passion for another way, this vision of the peaceable kingdom-- how is it moving us, living in us --you and me-- at this time in our life when there’s a rising tide against it?

What if its arrival isn’t something we await apart from us but comes through us, with us? What if it’s the very thing that’s in the making every time we reach across the divides of race and religion, across age and culture, across class and status. What if it’s not as far off as we might think -- this belonging to one another --but quite literally within our reach when we move beyond ourselves to say hello to a stranger; when, whether we see ourselves as predator or prey, we risk genuine connection that might well lead to getting mixed up in each other’s lives.

In just a moment we’re going to hear from Alan about how that very thing is happening for him and Franklyn right here in our own city. As we listen to that story notice what resonates with you … what you might already recognize or, through his telling, feel inspired to be about something new in your own life.

If Advent means anything it means ‘it’s not over!’ There is something unfinished that’s still in the making. And somehow in God’s wisdom, we human creatures are being given to share in this reconciling, new-making work that the Holy Spirit is already and always about. This week will hold endless opportunities to forge new bonds where differences have kept us apart. I wonder what might you get up to? I wonder what might it be for me?

Lighting the Peace Candle ~ Allan’s story:
Sabaḥu Al-khair
That is how you say “good morning” in Arabic.
Last Sunday Franklyn and I went to the Lessons and Carols for Advent service at Christ Church Cathedral. Franklyn had one of what she calls her crazy ideas and we invited our friends Sawsan and Ismail to come with us. Sawsan and Ismail are Syrian refuges and are practising Moslems.

The first lesson was presented by Adam Olsen who is a member of the Tsartlip First Nation and is a member of the legislative assembly. He told us of the Creation story as it is known to the Tsartlip people.
Many many years ago a powerful being came to the people carrying with him some large stones. He threw the stones out onto the land and they became the mountains of the Saanich peninsula. He also threw some of the people into the sea and they became the Gulf and San Juan Islands. For the Tsartlip people these are not just islands but are their ancestors.
Standing on top of one of those mountains and looking around at the other mountains and the islands, you can see how it might have been that way.

One of the other lessons was the story of Mary and how the angel came to her with the news that she was the chosen one. You all know this story, which is at the very heart of the Christian faith.
As I sat there I was wondering what our friends would make of all of this. I soon found out. On the way home Ismail explained that the Koran had an entire chapter devoted to this particular story of Mary and her son Īsā. So I did some research.
Īsā ibn Maryam (Jesus the son of Mary) is one of the most important prophets of Islam. He is usually referred to as “Īsā, peace be upon him” just as Muhammad is referred to as “Muhammad, peace be upon him”

These days it would seem many of our politicians want us to fear anyone who is not just like us. People who have different beliefs or a different language are the Others and are not to be trusted. But Sawsan and Ismail took the leap and came with us to the Advent service. And we are trying to learn about Islam. We will be going to the mosque sometime soon for a service.

So we are not so different. Except maybe that witnessing our friends and family being killed in the streets of Damascus during an airstrike is something not many of us can say we have done, thanks be to God.
Maybe there is a path to friendship and understanding, not just for Franklyn and me, but for all of us.
Insha'Allah. God be willing. 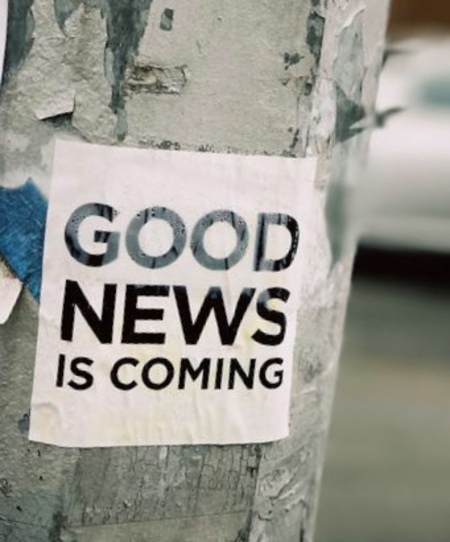 We must risk delight