The Gospel of John is distinctive for its great long stories. Where the other Gospels capture a scene in a few words, it’s as though the writer of John’s Gospel takes that moment and opens it up --wide! There are these convoluted conversations where, as the reader listening in, it’s kind of humorous -- how words get misconstrued … how Jesus picks up on the misunderstanding in a way that doesn’t resolve it but moves it into a journey of discovery. So that along the way we’ve got a man named Nicodemus asking “how can a grown person crawl back inside his mother’s womb and be born again?” And we’ve got the woman at the well imagining she might never have to fetch another drop of water in her life. And by the end of that story in which a blind man receives his sight, the people with sight are left wondering if they might be blind!

The story we have this morning from John’s Gospel does all of this, and more.

It begins with a daunting word: Lazarus is ill. This is Lazarus, brother of Mary and Martha -- the family we hear about more than any other in Jesus travels. Dear knows how they first met, but you get the sense there’s a special bond between them and Jesus … a deep care and affection. One of the sisters gets a message to Jesus: “your beloved Lazarus is ill.” It’s serious. There’s no “please come!” -- that’s a given, given their friendship. Except that Jesus stalls … deliberately … for there’s something more to be revealed, discovered. And for all it seems kind of twisted -- what’s he doing messing with these lives? is what it feels like -- it’s not really our job to either justify or judge his response. If anything, perhaps it allows us to tune into that experience of crying out in need -- “God help me!” -- only to be met by silence, absence … nothing at all. And what it’s like to endure those times … how we hang in, what we do while we wait.

By the time Jesus arrives, Lazarus has been dead four days. With the belief that the spirit lingers in the tomb for even two days after death, you’re not officially dead til the third day. In the meantime the third day is the day God acts … like when the wine ran out at the wedding in Cana … like early that morning on the third day when they went to the tomb.

But this is the fourth day -- the day beyond all hope … beyond reach.

Both Mary and Martha greet Jesus on his arrival. Beneath their “if you had only been here …” you can almost hear it, can’t you: “where were you? You’re too late!” And then Martha, perhaps feeling she was a little harsh or hurtful, backs off a bit, and as if in a way to convey her gratitude for his coming, she finds herself saying “but even now I know that God will give you whatever you ask.”

“Your brother will rise again,” Jesus says.
“I know he will rise again in the resurrection on the last day,” she affirms, moving into religious talk. But Jesus isn’t there to talk religion. He’s come to engage her and what’s happening in her life -- their lives. Right there and then.
Her religion lifts her mind from now to some future time they call ‘the Last Day.’ But Jesus says to her, "Martha, I AM … I am the resurrection and the life.” Martha hears it like it’s more religious talk. How else is she to hear it? She’s working from what she understands and trusts to be true. Well, it’s not finally Jesus’ way to talk her into something more … and so here begins another journey of “come and see!”

“Where have you laid him?” Jesus asks the weeping Mary and all the mourners gathered with her. Notice the journey begins with his willingness to go with them to their hardest place … the place that holds the most pain, most grief. The journey begins as they say to him, “come and see.” He follows them to the tomb … a cave, with a stone lying against it. On arriving he says to them, “Take away the stone.” But Martha knows better: “Lord -- the stench!” What’s he thinking? Four days later ... why make it worse than it is?

A few weeks ago, at our Weird Church book study, I heard Emily say something that sounded like there’s such a story in her own life. Having asked her if she would be prepared to tell us something of that story this morning, Emily agreed. So Emily, here we are on holy ground with you …

We are witnesses, aren’t we, both in our telling and in our hearing … witnesses to the truth that God alive in our world … alive in our frail flesh … alive and at work calling us into life.

And not only are we witnesses.

There’s that further scene in Lazarus’ story where we see him standing there … miraculously alive but his body still bound in burial cloth. There’s still more that needs to happen for him to come fully into life. So what does Jesus do? He looks to all these astonished bystanders … “Unbind him and let him go!” he says. He calls the friends and the family into the act.

Who do you know? … what situation are you aware of? … where lending a hand in support of resurrection life is needed, is called for?
Let’s take some time in silence just now to ask ourselves -- and not just ourselves -- but the Spirit who’s summoning presence empowers us to be about more than we might ever have imagined.

Who do you know? … what situation … where lending a hand in support of resurrection life is needed, is called for? 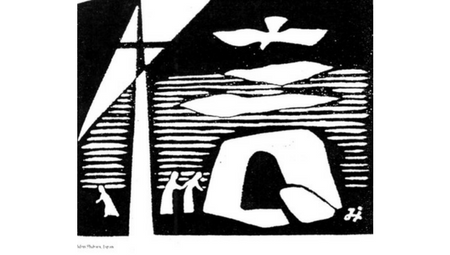