That night that Jacob is alone by the river, accosted by this figure whose identity we never really know … it has all the feel of a life and death struggle. One that catches Jacob by surprise … Jacob the strategist, the schemer.
Or maybe that’s not altogether fair. Maybe it’s fairer to see Jacob as someone who’s got his eyes wide open … who understands the customs and recognizes his disadvantage that he didn’t bring on himself. It could have just as easily been he who emerged from his mother’s body first. But Esau was the first born. That’s just how it went. But “just how it went” set in motion a certain privilege for the first born, and a disadvantage for the next. And Jacob wasn’t the type to lie down and take it. If he could see a way to work around it, to get ahead, he’d go for it. AND he had a sympathetic mother. So his own wits had his mother’s backing and then some! And if round one went ok, why not have another go? He just wanted a fair shake at life.

Except that the system he and his brother were born into, made no room for fair. And this time, Esau, having lost again, is out for blood. So Jacob runs. Runs for his life. Runs with his father’s blessing. Runs in the knowledge he has wronged his brother. And runs, here and there, into the assurance that God is with him! --which, while it surprises him, strengthens him.

Coming back to that night by the river … Jacob had done everything he can think of to get to and through this meeting with Esau alive. He has sent out ahead of him a huge entourage of animals and servants … in waves, drove after drove after drove … each with a message as they approach Esau: “These are gifts for you from your servant Jacob, who is on his way to meet you.” It’s Jacob’s way of protecting himself … placating Esau with endless gifts, and creating a buffer, a protective shield … building in some distance in the event Esau mounts an attack, it gives Jacob some time to flee.
And then he sends his wives and children just to other side of the river while he himself remains alone as the night falls. One last night to prepare for this reunion after a 20 year estrangement. One last night to gather his courage perhaps … even to pray for a merciful encounter. Whatever his reasons, he chooses to spend the night alone.

And then suddenly, out of the darkness of the night, Jacob is confronted by this powerful being … and this intense physical wrestling match ensues … lasting all the night long. You get the sense Jacob is exerting every ounce of strength to keep from being overpowered, maybe even from being destroyed, for all he knows. All his wealth, his servants, his women and children, all his strategies for protection … none of this is available to him. This is Jacob facing down this terror in the night, stripped of everything but his physical strength, his mental agility. This is Jacob forced to experience his own self … to discover what he’s made of, who he is without all the trappings, without his mother and her favouritism. This is Jacob not only face to face with this other, but face to face with himself.

Do you know that place? where you have been stretched to your limit, and then some, forced to reach deep into the resources you did not know you had. Sometimes it is for us not so much to rest as to wrestle, sometimes not so much to let go as to hold on, push through.

Jacob has no idea who he is up against. He does know it’s not a game. They persist in the struggle all through the night, neither one finally overpowering the other. And with the coming of dawn, this night visitor demands to be released before the light reveals. Even though he is injured, Jacob refuses to let go. For as much as he knows he is reckoning with a fearsome power, somehow he also knows there is yet something to be gained, to be drawn out of this struggle … and so he insists, he wrestles out a blessing.

What is it to receive blessing-- this power for life-- from one who it seems is so strong against you?
For all its force, what if in the end the motive that night was not to destroy but to bring to birth? Is that what this wrestling is … a kind of second birth?
Maybe you know what it is to come through a great struggle, marked, scarred perhaps, even limping, yet somehow new, different, heading out on a new path, in a new direction or with a new perspective, a new sense of your being -- a new being!
Jacob is named afresh … given a new name … a new future.

The identity of this wholly other is never fully revealed … but as Jacob rises that morning, he has his own sense of who he’s struggled with, or at least who has been in the struggle with him.  “I have seen God face to face and yet my life is preserved,” he exclaims, and so he names that very place by the river Peniel, “the face of God.”

There is great hope for us, in knowing that our struggles -- whatever they may be -- can in fact be an opening to a life-giving encounter with the holy, if we but hold on and stand firm and persist. 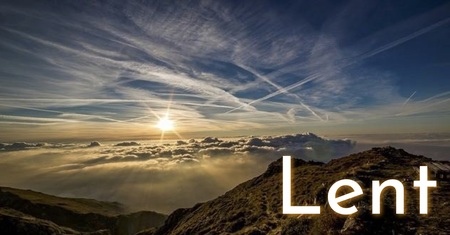 Now is the time to love