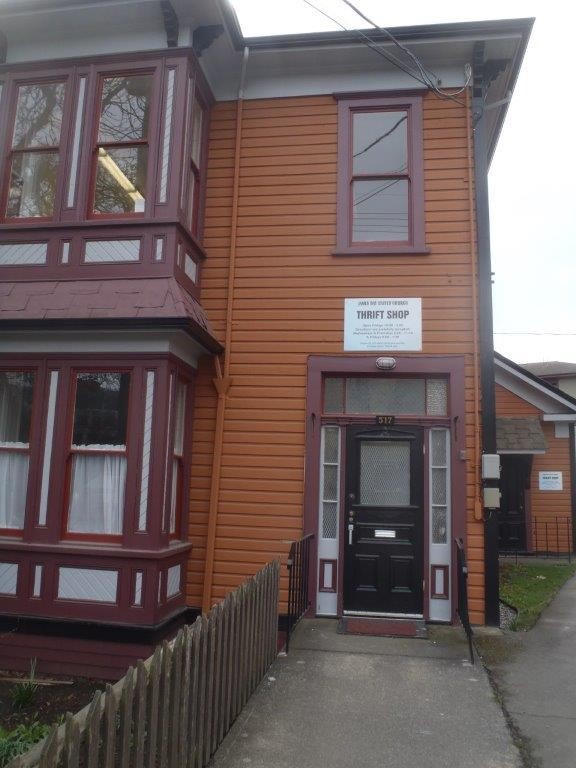 Then
There was a Methodist congregation in James Bay as early as 1899. That year the Victoria City Directory listed a Methodist church on Michigan, near Menzies Street. The church had actually been dedicated in 1892 as James Bay Methodist.

Immediately east of the church at 82 Michigan stood a two-storey house which, in 1899, housed William Blair, artist, and Edward Robinson, jailer.

In This Old House: Victoria's Heritage Neighbourhoods by the Victoria Heritage Foundation we read, "This dwelling is a typical two-storey Italianate house of the late 19th century." Henry Munday, a contractor, built the house soon after arriving in Victoria. He was involved in the construction of B.C.'s Parliament Buildings and built the Work Point Barracks. He married Nora Woodward in 1892 and they lived here until 1899.

A smallpox scare suspended his contracting business. He became a shoe merchant in 1899, eventually opening four shoe stores. Munday's Fine shoes finally closed in the 1990s. Henry had died in 1954 at 90.

By 1901 Mr. S.W. Edwards, a clerk, was the resident listed. In 1907, a new grid system for street addresses in Victoria saw the number change to 517 Michigan. Edwards remained until 1925. From 1926 until 1935, Mrs. E. Edwards is the tenant of record. From 1936 until 1940 T.E. Fisher is the occupant and he has a telephone.
On further research, it turns out that the house was purchased in 1900 by Samuel and Elizabeth Edwards. They had come from Ontario in 1891. By 1897 Samuel, whose trade was painting carriages, had taken a position as a customs officer. From the time they moved into the house, they stayed until Samuel died in 1925.
Elizabeth lived on in the family dwelling until her death in 1935. At that time her daughter Nora, with her husband Edgar Fisher, became chief occupants of 517 Michigan. They lived there until c.1940. Mr. Fisher, who came from South Africa, worked as a steamship engineer.

E.H. West moved in and established a chimney sweeping business in 1944, according to the city directories. West's advertisement can be found in the classified section of the Daily Colonist October 27, 1946, on p. 14. The ad reads, "James Bay Chimney Service - FOR Satisfied Customers Phone B8346."

In 1958, the old house went through a transformation. It became the B.C. Government Lecture Room. Its rooms were converted to a presentation theatre for providing government information to various audiences. The building served in this role until 1972. That year the dwelling was made the centre for the B.C. Government Coordinator of Accident Prevention.

The house became headquarters of B.C. Government Provincial Secretary Classification Service in 1975, and served as such for the next eight years.
The Ministry of Intergovernmental Relations was occupant in 1983/84, but in 1985 and 1986 the dwelling stood empty. It had, however, new owners. In 1984 James Bay United Church had purchased the house. In the City Directory of 1987, 517 Michigan is entered as James Bay United Church Annex. The house had stood since 1891. The church had been its neighbour since 1892. Now, 92 years later, they had a single owner. February 1, 1985 was the beginning of a new era for the old home.

Now
Matthew Kinaston in A Century of Dreams, a James Bay United history, states on p. 74, "During 1984 the house at 517 Michigan Street, where the Ladies Aid used to go for water decades before, was put on the market." Kinaston goes on to tell how the congregation decided to purchase the property. Loans were secured, 'Faith Bonds' sold and cash donations made. The property was secured in 1984.

Cleaning and renovation of the old house began immediately. The Management Committee of the church pondered ways to make the building of use in the community and to pay for itself. Kinaston says, "They settled on a plan to open a Thrift Shop to serve the needy families in James Bay." The building was ready for use by January and officially opened February 1, 1985 with a ribbon-cutting by Reverend Bert Forsythe.

The shop is open every Friday from 10 until 2. Volunteers provide all the staffing for this store which is a wonderful source of a variety of goods, well beyond clothing. The store has proved a huge asset to the residents of James Bay and beyond.
Today 44 volunteers are involved with the shop. It has a family feel. People come to shop and have fun, and are often attracted to become helpers.

The James Bay United Thrift Store has had a table at the Volunteer Fair for the past two years, with good success. A reciprocating agreement, which began last summer with the James Bay Market, has led to Saturday openings of the Thrift Store on Market days, and the promotion of each other's offerings at each site. They will do it again this year.

The organization of the Thrift Store, with its many rooms, is well-done. There are nicely laid out theme rooms. With the help of a professional shelf arranger from a known retailer in Victoria, the market has a quality of display you wouldn't normally see in a thrift store. At one point everything was taken back to the walls and the white paint and white shelves were installed to better display the carefully arranged items.

On Friday, the day of the Thrift Shop opening, several tables are set up on the paved yard outside the house. A sampling of the goods from inside is displayed. They are covered with awnings to protect them from the rain and sun. Although these products are for sale, and may be purchased, their display is intended to attract shoppers into the store itself, where the majority of the stock is located.
Every item donated to the shop finds a home.

Many not sold in the store are sent on to Our Place for use by those needing clothing and other soft goods. Soiled towels go to the SPCA for use in their work. Each unsold piece is donated somewhere. Nothing is wasted.

The shop closes every year from Christmas until February. This gives volunteers a chance to do major cleaning and rearrangement. The Thrift Store always re-opens the first Friday in February, as it did originally in 1985.

There is a staff room upstairs for the workers. Here they can go for a cup of tea or coffee and exchange news and ideas. One volunteer has provided the table around which the workers sit. The donor said, "It was my mother's. It's the right size for this room. She would be so pleased to see that her table is serving us."

Get Connected
Our Thrift Shop